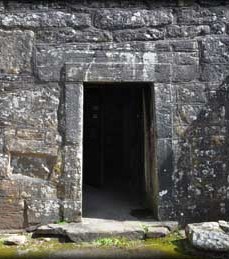 The Blossom Harp Festival is a lovely small festival, now in its third year, held in Tuamgraney, County Clare, in a beautiful and historic area near the shores of Lough Derg. The location and the list of musicians for this year’s event were attractive, and the date was free for us, so we decided to attend, and to take part in the harp duo competition. The fiddle and concertina workshops were given by Manus McGuire and Mary McNamara, respectively, both outstanding players and teachers in their own right.

Tuamgraney is a lovely village, large enough to contain all the events and small enough that you can walk to everything. The organisers (Elisabeth Affolter and her team) did a fine job in making information available on the website, and in making the actual place look welcoming; there was even a floral harp on the village green! The name Tuamgraney will be familiar to aficionados of traditional Irish music because of the hornpipe, “The Humours of Tuamgraney”, also known as “Tuamgraney Castle” (the Scots call it “Loch Leven Castle Hornpipe”). Here it is, spelled slightly differently, in Breandán Breathnach’s “Folk Music and Dances of Ireland”. And here’s the actual castle, with the harp students, instructors and festival organisers arrayed in front (photo by Gordon Daly). We arrived on the Saturday afternoon, in bright spring sunshine. Our first musical experience of the weekend was a real treat. Manus McGuire invited us to his house nearby, where we had a lovely relaxed session of tunes and conversation. From his first recording with his brother Seamus, “The Humours of Lissadell” in 1980, through the albums with Buttons & Bows, Moving Cloud and The Brock McGuire Band, and his solo albums (a new one is in the works), Manus has long been one of Ireland’s finest fiddlers, a thoughtful and stylish musician with a great choice of material. It was a pleasure to have the chance to play some music with him.

Later we had dinner in Nuala’s in the village, with Manus, his wife Geneviève, and Michael Rooney, the outstanding harpist and composer, one of the harp workshop teachers for the festival. By the time we’d finished, the session in the bar was starting up, but we still had some work to do on our competition tune, so we left them at it. There was no shortage of musicians anyway! On Sunday afternoon, before the competitions, we just had time for  a quick look at the harp makers exhibition, which featured instruments by Tim Carroll (Killarney Harps), Kevin Harrington, and Brian Callan. Great to see that high quality harps are being made in Ireland now.

Competitions would not normally be our thing, but in this case, the stated criteria for assessment were interesting. In both solo and duo competitions the judges would be looking for “flow, variety, originality, arrangement, stage presentation”; also, for the duos, “complicity; that harp is not only accompaniment but has its part in the performance; that both instruments (harp and the other) play harmonies.” These are qualities that we aim for ourselves, and we thought it would be an enjoyable challenge to work on – which it was.

Each performance was to be between five and eight minutes long, so we decided to work on a revised and extended version of one of our own compositions, “Count Me Out” (the last track on our CD, “resonance”). It’s a piece in several sections, and in multiple time signatures (see our blog post, “Evolution of a Tune: ‘Count Me Out'”). We changed the improvised introduction to feature the harp more, and added a new section at the end, making the whole piece a little over six minutes long.

The venue for the competitions (solo harp and harp duo) was St Cronan’s Church, said to be the oldest church in continual use in these islands. It was built in the 10th century and enlarged in the 12th, and is of great architectural and historical interest. You can read about it on this website, which is also the source of the following two photos: Entering through the same doorway (above) that local hero Brian Boru would have used, you find yourself in the 10th century nave, and progressing further you reach the 12th century chancel, where the performances were to take place – an unexpectedly bright and cheerful space, after the austere exterior, with excellent acoustics. Of course, as might be expected in a stone church in Ireland in March, it was also rather chilly, which caused some worries about tuning and cold fingers, for all competitors. The prize table, with the O’Connell/O’Dowd Family Cup

It’s a cliché to say “the standard of competition was very high”, but such was indeed the case. The solo competition was first, at 2pm, judged by harpist Denise Glass and Manus McGuire. There were seven harpists (mostly young and female) and they gave us a wide variety of material: Carolan airs of course, but also a classical piece, traditional Irish tunes, a jazz standard, and some original compositions. The winner was Grace Minnock, an outstanding young player and already a composer. Then came the harp duo competition, judged by Denise Glass and Fiana Ní Chonaill, with five entries, featuring the harp in combination with fiddle, flute, tin whistle, accordion and guitar (ourselves!). Again there was great diversity in material and some really good arrangements. We particularly enjoyed the interplay between one young harper and her mother on accordion, playing some traditional Irish dance tunes. Though we were happy with our own performance, we were nevertheless amazed to find that we had won first prize. The prize includes a perpetual cup, the O’Connell/O’Dowd Family Cup, donated by Fiana in memory of her late grandmother Rita O’Dowd senior, who was a musician. So we have to return next year to hand it over to the new winners – great to know we’ll be back in Tuamgraney! Fiana Ní Chonaill presenting us with the O’Connell/O’Dowd Family Cup.

Another part of the prize was the opportunity to play in the gala concert on Sunday evening, held in St Joseph’s church. A packed audience was treated to some wonderful music, mostly but not exclusively on the harp. The first half featured fiddle music from Manus McGuire (with Paul on guitar), Mary McNamara’s elegant concertina style, and outstanding harp playing from Holly Geraghty, Fiana Ní Chonaill and Michael Rooney. Grace Minnock played a great short set to open the second half, followed by ourselves (with “Miss Hamilton” and “The Millstreet Polkas”), and then came The Blossom Harp Ensemble, Elisabeth Affolter’s harp orchestra – a reduced version of it, since some members were unable to attend, but still, six harps and a fiddle make a fine sound, and one of the harpists showed an exuberant style of step dancing. For the finale, all the musicians came together to play Carolan’s “Eleanor Plunkett”. (on the altar) and the other concert performers.

We thoroughly enjoyed our trip to the Blossom Harp Festival. As we’ve experienced before at harp festivals in Dinan (Brittany) and Lauterbach (Germany), the harp community is a welcoming and inclusive one. Many thanks to Elisabeth Affolter and her team for a great festival. On the Monday we returned to Kerry, with a short stop to visit Custy’s Music Shop in Ennis, County Clare. Reidun’s new tutor, “My Little Harp Book” is now available there, as is Paul’s “Traditional Irish Guitar” book/CD. Visit http://www.custysmusic.com/

All photos in this post were sourced from the Facebook page of The Blossom Harp Festival, except for the two photos of St Cronan’s Church, separately credited above.