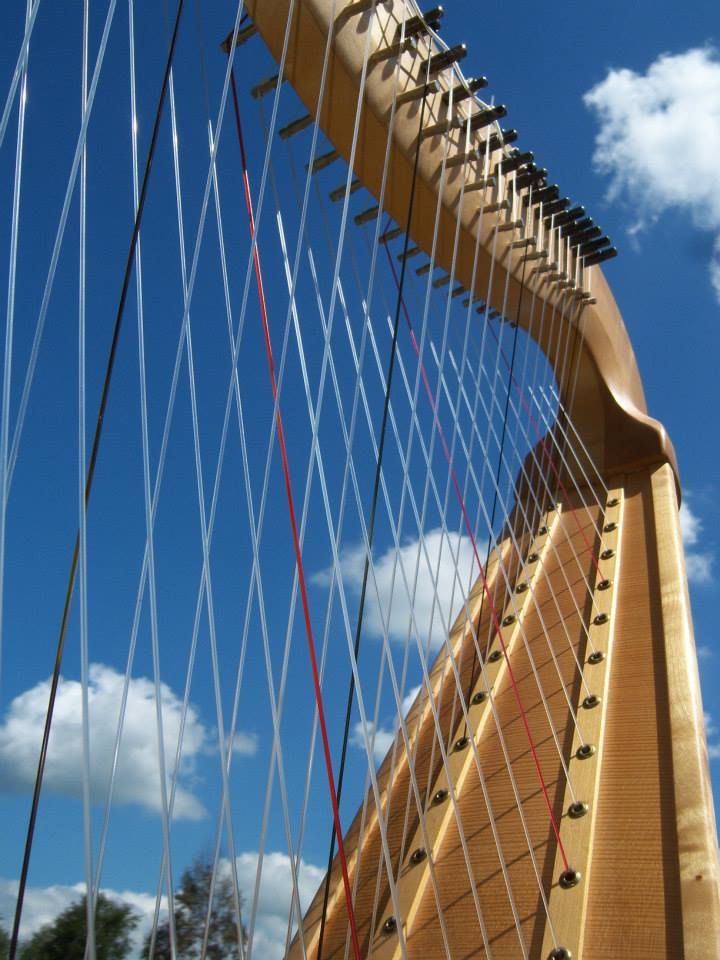 Reidun talks about this unusual instrument, which is featured on track 10 of our “resonance” CD. Playing it is a “work in progress”, but we hope it will soon be a regular part of the Amala sound. The modern cross-strung chromatic harp was developed simultaneously in Germany & US in the 1990s. It has two rows of strings crossing each other, giving two complementary whole-tone scales: Detail of my cross-strung chromatic harp.

Each side has 6 strings per octave as opposed to 7 and 5 (chromatic harp “Pleyel”). Whereas the logic of the Pleyel harp can be compared to a piano, with 7 white and 5 black keys per octave, the 6/6 chromatic harp has no “favourite key” – F# major is technically as easy or difficult to play as C major! A shape (fingering) corresponds to a sound or melodic experience, and transposing becomes more obvious because of the symmetry – transposing any given shape means either to give it a parallel shift, or to mirror it, the crossing line of the strings being the mirror. To reach both sides with both hands, we usually play in the middle of the harp, close to the crossing point, with a mixed “thumbs up and thumbs down” technique. Christoph Pampuch redesigned the first of these 6/6 harps in 1997 in Germany. I got my first chromatic harp in 1999 made by the “Klangwerkstatt”. The harp in these pictures was made by Henrik Schupp (Hamburg). Finding my way around this instrument is a slow process as I am self taught. Seeing Christoph playing his harp did of course inspire me at the start, as much as the Belgian Pleyel harp players such as Cecile Marichal and Paola Chatelle. A big influence on my playing was the classical pedal harp lessons I got from the Belgian harpist Sophie Hallynck many years ago. I think the “Belgian” influence make me use less the “thumb down” technique – I do use it, but often try to avoid it for sound reasons. At the second chromatic harp meeting in 2006:
four harpists on one instrument!

Henrik Schupp’s harp needs more finger strength so it’s a bit more of a workout compared to the gentle Klangwerkstatt harps, but it gives you more dynamics. In spring of 2014 I actually took some sandpaper and made the soundboard a bit thinner to try and improve the sound – it worked!

The reason I am very slow to publish sheet music for this instrument is that I’m still finding completely new ways of doing things. We also have a diversity of instruments. Fingerings which would suit a low-tension, narrow-strung Klangwerkstatt harp would not necessarily suit my medium-tension, wide-strung Schupp-harp and vice versa. Recently I changed the strings a second time. Starting out on carbon-fibre strings (which my fingers don’t agree with), I played on nylon strings for several years. Finally I ended up with gut strings, like the classical harp, which seems to suit my fingers and ears very much! The carbon fibre strings are very “flashy” in sound, but I don’t like how their harmonics mix, and the warm sound of the gut strings doesn’t mean it has to sound “dull”!

My chromatic harp on the cover of the 2005 CD/DVD “Balance” by Belgian band Amorroma, with whom I played and recorded for several years.

If you want to hear what the chromatic harp actually sounds like, check out track 10 on the Amala CD “resonance”, a jazz piece by Dave Brubeck called “(I’m Still in Love With) A Girl Named Oli”; there’s a short sample here: https://store.cdbaby.com/cd/amala. Or follow this link to a home recording of Bach’s Prelude No. 1: https://www.youtube.com/watch?v=n12tHST4Y58.

And see: http://www.chromatiker.de/ (annual meeting of the “cross” harpists 😉 )