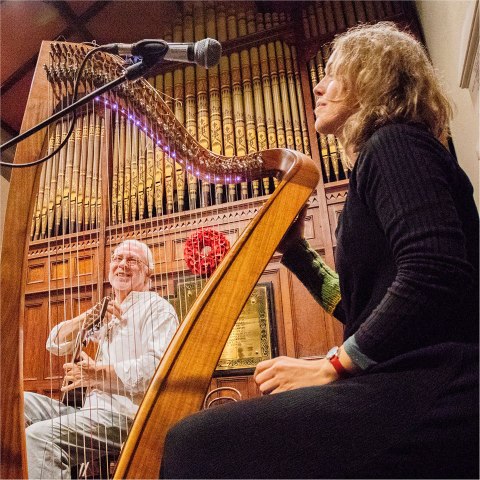 In the summer of 2018, Amala was fortunate to take part in three Irish arts festivals, in County Clare, County Roscommon, and Dublin city. We really enjoyed the diverse experience of these festivals, each special in its own way.

Mountshannon is a very attractive 18th century planned town on the western shore of Lough Derg, with a beautifully landscaped park and a resident population of creative people in a variety of arts.

We played in the concert on Friday, 8 June, in St Caimin’s Church. We were very happy with how our 25-minute set went down. The main event was “Sacrum + Profanum: Pilgrimage of Love”, which the festival website described as follows:

The performers were Wolodymyr Smishkewych (voice, zanfona – a type of hurdy-gurdy – and percussion), Yonit Lea Kosovske (portative organ) and Michelle L. O’Connor (vielles). We were quietly amused to be sharing the evening with performers whose names are even more tricky to spell than our own!

It was a wonderful experience to hear these ancient songs in this late 18th-century stone church; a thoughtful 21st-century  feature of the performance was that English translations of the texts (in Latin,  Provencal French and other languages) were projected onto the wall beside the musicians.

On the following day, Saturday, we played a lunchtime concert in The Snug café and wine bar. An audience member shared this video with us:

Afterwards we attended the launch of a fascinating artistic and musical project, An Crannόg Ceoil – and it was a launch in the literal sense, because the crannόg is a floating artificial island, which was launched out onto the lake. It creates musical tones through a system of organ pipes and levers, the sound being produced by the motion of the wind and waves, or by human intervention, rocking this ingenious interactive sculpture. It’s the work of local artist Paul Berg, and you can find out more about it here: https://paulberg.wixsite.com/paulberg.

Here’s a link to a video of the launch:

Leon, another local artist, invited us and a few more people for a boat trip on the lake, to view the historic island of Inis Cealtra, or Holy Island. It was a really beautiful summer’s day, so we were delighted to accept, and it was a wonderful experience. Read more about Inis Cealtra here:

We left Mountshannon with a lasting impression of the beauty of the area and the friendliness and creativity of the people.

In Ireland, word of mouth is the best recommendation (and the hardest to get!); and as with Mountshannon, our invitation to Boyle came after being seen at another event, in this case, our December concert in The Stag’s Head in Dublin with Anam, the male singers of Anúna. It was an honour to be a small part of such a vibrant and diverse festival, featuring major contributors in the fields of visual arts, literature and music.

Boyle itself is a very interesting and historic town. Its Cistercian abbey dates back to the 12th century; there are many fascinating old buildings to be seen, and there is a lovely river walk.

Our event, on 24 July, was a concert in the historic King House, a restored 1730s mansion, once the seat of the King family, later an army barracks, and now beautifully restored – after a period of neglect – as a museum and cultural centre, owned by Roscommon County Council. More information here: http://www.kinghouse.ie.

We played in the Main Salon, a large but elegantly proportioned room overlooking the river; its excellent acoustics meant we had no need of amplification.

We were pleasantly surprised to have a full house for the concert, and even more humbled and delighted to receive a standing ovation at the end of our hour of music.

It was great to be back in Ranelagh (south Dublin); we had a CD launch in the Ranelagh Arts Centre in 2016 and really enjoyed playing for such a receptive audience. On this occasion we were sharing the bill with the wonderful Liam Ó Maonlaí, in a concert in Sandford Parish Church on Friday 28 September.

Once again we were blessed to have an audience who were into the music (no doubt Liam’s presence on the bill was significant there!). We enjoyed trying out some new material, not on our CD. Here’s a link to a video of us having some fun improvising around the “Ballydesmond Polkas”, preceded by the end of “Miss Hamilton”:

Liam Ó Maonlaí’s performance was outstanding. He has been an active musician for a good many years, but his voice has lost none of its power; arguably it’s better now than when he first came to public attention with The Hothouse Flowers back in the 1980s. Whether singing sean nόs or rock (incouding his own compositions) he pours his heart and soul into a song, to mesmeric effect. The sean nόs songs were unaccompanied, of course (and in Irish), while his piano accompaniment worked well for the more modern material, sounding bluesy or minimalist as the music required. He even used the recently restored and massively powerful church organ!

Tara Keane took some atmospheric photos of the event, including those shown here, and she kindly allowed us to reproduce all of them on our Facebook page. You can also find them, and much more, on her website: