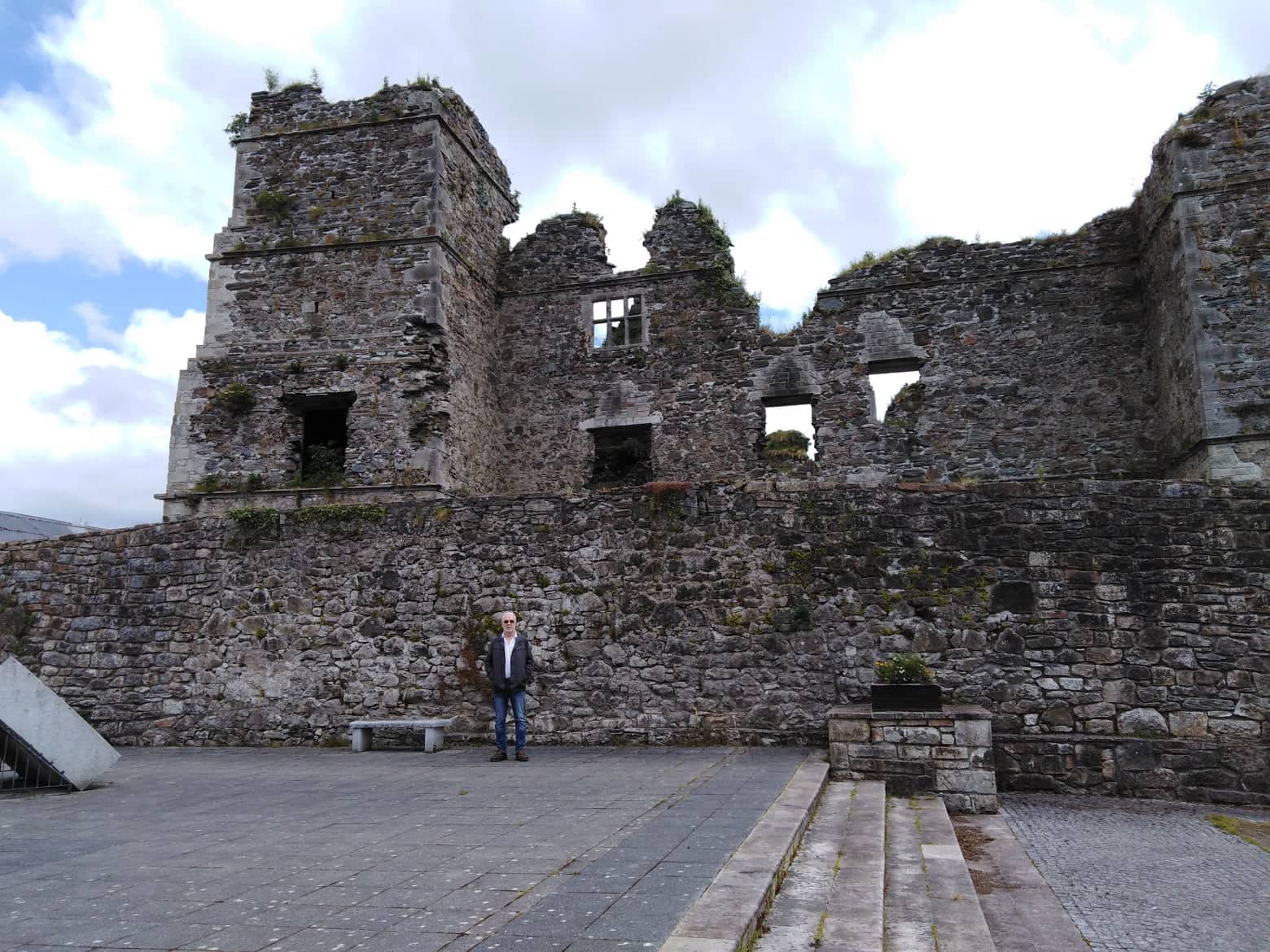 This month we re-visited County Leitrim, a beautiful but relatively little-known county in the north midlands of Ireland, a place of lakes and rolling hills, of pretty towns and villages and friendly people. We were happy to be back, having seen something of the area last summer when we called to Drumshanbo during the Joe Mooney Summer School, on a side trip from the Boyle Arts Festival in the neighbouring county of Roscommon. Compared to other parts of the country, property is cheap in Leitrim, and one result of this is that you could hardly throw a stone there without hitting an artist of some description, and so there is a thriving artistic community (another, less welcome consequence of cheap land is that Leitrim has a serious problem with land being bought up by investors for monoculture conifer afforestation).

The purpose of this visit was to play a concert in The Glens Centre in Manorhamilton. Here’s a description from the Centre’s website, http://www.theglenscentre.com/:

“The Centre was built in 1994 by North Leitrim Glens Development Company as a general purpose meeting and performance space, and tourist information hub for North Leitrim. Originally the old Methodist Church, built in 1830 and deconsecrated in 1964, the company restored the old building and added self-catering apartments and office space. In 2001 the company converted the auditorium to a 140-seat theatre. Since then, the Glens Centre has become a favourite of both artists and audiences. Thanks to the accommodation and rehearsal space, the Glens has pioneered the ‘performance laboratory’ concept, where artists live in the community while they develop new work.”

Once again, we were fortunate to have a nice write-up from Siobhan Long in the listings section of The Irish Times.

The concert was on Friday, 14 June. We travelled up on the previous day and met Glens director Brendan Murray, who showed us around the Centre and later introduced us to several local artists in Heraghty’s pub, a lovely old style place with good local beer.

Next day we had some time to explore Manorhamilton – found a country market just up the street, and went on to check out the 17th century castle of the Hamiltons, now ruined but still quite a sight. A meadow of wild flowers was an equally impressive sight, and it was great to watch the martins, swallows and grey wagtails along the river. Interesting too, though much overgrown, was the ruin of the 17th century Protestant church. A good healthy lunch was had in An Caifé Bia Sláinte.

We were looking forward to trying out some new material at the concert, and for the purpose had brought two harps and two guitars – a large walnut lever harp and a smaller 6/6 cross-strung chromatic harp; a Martin M-38 guitar tuned DADEAE and a Martin Backpacker travel guitar in standard tuning (EADGBE). All these instruments are fitted with pick-ups, and we used just a small amount of amplification. The acoustics in The Glens are very good, but it helps to have just that little bit of push with the sound.

We really enjoyed playing, for a small but very receptive audience. The layout was café style, tables and chairs, which made for an intimate vibe. We played our usual concert format, two sets of c.40 minutes each with an interval. Incidentally, of the 19 items we played, only 9 are on our CD. The first three items in the second half were all “chromatic” pieces with lots of modulation – a samba by Antonio Carlos Jobim, a Bach prelude, and a jazz tune by George Shearing. The Bach was a chromatic harp solo, the others were played on chromatic harp and travel guitar. It was the first outing for these tunes, and we were delighted with how they were received. At the end, when an encore was called for, we were enjoying ourselves so much that we happily took the chance of doing a totally unrehearsed improvisation, in a key suggested by the audience (F major).

It was great to chat to some of the audience afterwards, and interesting to learn which tunes they liked best. “Miss Hamilton” is always a favourite (a favourite of ours too), though we were unable to come up with a credible story to link the lady to Manorhamilton. The Jobim samba got some very nice comments, as did a Galician tune. And of course polkas always go down well!

It would have been lovely to stay around for another day or two and explore the scenery (O’Rourke’s Table was suggested as a hill walk well worth doing) but Reidun had a gig back in Kerry on Saturday so we hit the road early. As an extra thrill, newly-qualified driver Paul got to drive on a motorway for the first time . . .