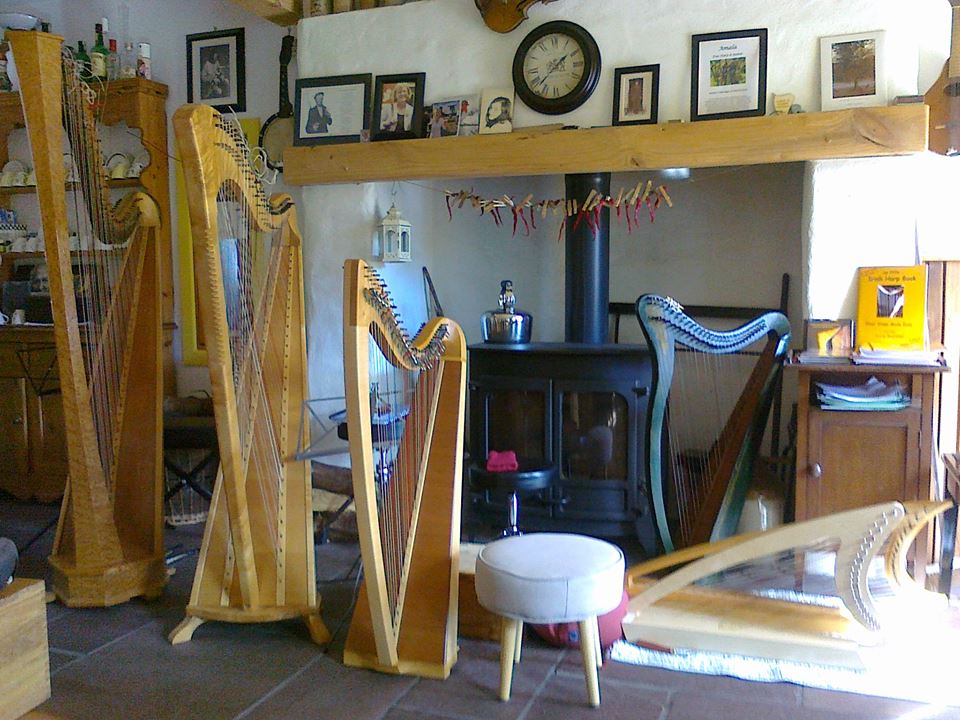 Harps ready for use in Reidun’s Harp Centre.

I very much enjoyed Reidun’s Harp Centre’s celebration of Lá na Cruite (National Harp Day) last Saturday, 20 October 2018. The venue itself is very appealing – “The Green Harp”, a self-built modern house that gives the impression of an old “rambling house” cottage, with excellent acoustics, in a tranquil setting below the MacGillycuddy Reeks. The programme included workshops for beginner, intermediate and advanced harp students, which I – being none of the above – did not attend, but which apparently went well. What I really enjoyed was the concert, a combination of demonstration and recital, using a variety of different harps and a diversity of music. Reidun talked about the old Irish harps, the best-known example of which is the Trinity College harp (mis-named the Brian Boru harp), which appears on our coins and official documents. Those instruments differed radically from the modern harps in construction, playing technique and sound, and had effectively become extinct in the early 19th century.

She then showed a modern small lap harp (a 20-string model, bottom right in the photo), suitable for beginners; in fact she has a rental scheme for beginners using such harps. Next she showed a small Gothic harp (just behind the lap harp in the photo), a type common in Continental Europe in the past. Like the rental harp, it is tuned to one key, usually C (like the white keys on a piano), and the only way to obtain sharps and flats (like the black keys) is by re-tuning. But of course there’s plenty of good music that is played in only one key, especially early music and some traditional music. Reidun played “Brian Boru’s March” on the Gothic harp, and indeed it sounded quite “medieval”.

The elegant green harp to the right of the stove (which was not on!) is a Morley, from the late 19th century; the house is named after it. Reidun used this harp to demonstrate an early system for chromatic tuning (i.e., giving the sharps & flats). Just below the tuning pin, each string has a small metal blade, which can be turned to shorten the string and produce a note one semitone higher.

The harp in the centre is typical of what is nowadays called an Irish harp; some are slightly bigger. This one is made by Pepe Weissgerber from Berlin and has 31 strings. These harps are “lever harps”, meaning that they use levers, instead of blades, to shorten the string and produce chromatic notes; the levers are easier to use and are more precise than the blades. Both levers and blades can be used to pre-set the key, and also can be used during play if required, though this calls for some dexterity, not to mention forward planning – no point in trying to make adjustments while both hands are busy plucking strings. To demonstrate how to use the levers while playing, Reidun played Bach’s “Arioso” (from Cantata BWV 156). Besides being a lovely piece in itself, this was an appropriate choice, because it was the increasing chromatic complexity of the music being composed in the Baroque era – by Bach in particular – that made the development of devices like levers and blades necessary.

Next to the Irish harp (second from left in the photo) is a very interesting instrument. This is a 6/6 cross-strung chromatic harp, representing another way to tackle the issue of chromatic tuning. Instead of adjusting the string length by levers or blades, this harp has two rows of strings, tuned to whole-tone scales a semitone apart; so each note of the chromatic scale has its own string. One row is tuned to C-D-E-F#-G#-A# (repeated several times in ascending octaves) while the other is tuned to C#-D#-F-G-A-B (similarly repeated). The two rows cross more or less in the middle, and obviously this system requires a whole new playing technique. Reidun played two contrasting chromatic pieces to show the potential of this harp, a theme-&-variations by Scarlatti and the 1930s jazz tune, “Dream a Little Dream of Me”.

The large harp on the left is a double-action pedal harp by Erard. There are seven pedals, one for each note of the scale, and each pedal has three positions: thus, depending on the pedal position, the same string can sound Ab, A or A#, etc. This type of pedal harp is used in the modern orchestra.

Finally, to illustrate the harp in combination with another instrument, I joined in with guitar for a few numbers from our duo, Amala; the Irish harp was used for this. We like to arrange tunes to allow both our instruments to alternate between lead and accompaniment roles, and also we like to improvise, so I hope we were able to show something of the versatility of the harp (and indeed of the guitar!). We played Kerry harper Cornelius Lyons’s lovely air. “Miss Hamilton”,  a set of polkas, a set of hornpipes, and two original pieces featuring a lot of improvisation.

Afterwards, everyone stayed around for cups of tea and a chat, which was lovely. Looking forward to the next event in The Green Harp!

We had a lovely gathering of locals here, and it felt more like a rambling house in the old days, than a public concert. Our place being off the beaten track, people tend to forget about their phones here, so I’m afraid, no videos and pictures of the event, but what a pleasure to look up from your instrument and to look into faces rather than phones! Afterwards, everyone gathered in the kitchen for a long cup of tea and chat, and new friends and connections were made, and we are all looking forward to our next house concerts here at “The Green Harp”.