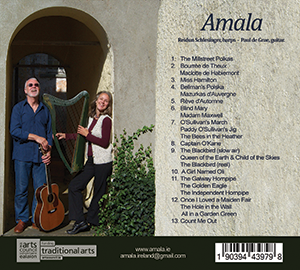 How we got started

The path to our first CD is partly an accidental one, as are so many things in life. It was by chance that we first met, in March 2014: that was in Killarney, at a music session following the funeral of our mutual friend, the legendary Kerry fiddler Paddy Cronin. It was a boisterous session, crowded with musicians as you’d expect; and it was not until some time later that we first actually played together – another accidental meeting, on the last night of the Patrick O’Keeffe Festival in Castleisland, Sunday 26 October 2014. We found a lot of common ground, stylistically and in our approach to arranging and performing music; and soon we were making plans to form a duo and to make a recording.

Over the following months we put together a repertoire based on our shared musical experiences and also on those aspects of music which each of us individually brought to the mix. Irish traditional music and the Irish harp repertoire were an obvious starting point, to which we added Reidun’s knowledge of other European folk music and her amazing improvisational skills, along with Paul’s interest in English and American music, and a shared interest in jazz. Deciding on repertoire and working on detailed arrangements proved to be an exhilarating experience. Soon, with our friend Sean Abeyta operating the technology, we made our first demo recordings and shared them on Youtube, so people began to take notice of us.

Since neither of our names is particularly easy to spell or pronounce, we had to come up with a new name for the duo. “Amala” honours a friend who was taken from this life far too early. Later we discovered it’s the name of a leading Bollywood actress, but we reckon there’s not much of an overlap in our target audiences…

We applied for Arts Council funding under the “Deis” scheme for recordings of traditional music, and as part of the application process we had to make a clear plan for the album: not only an artistic statement of intent, but also a realistic strategy for making it happen. This was a useful focus. And when we were approved, the money was useful too!

We decided to record in Garry O Briain’s studio in County Clare, on the edge of the beautiful and unique landscape of The Burren, and we based ourselves in nearby Kinvara, a small town which probably has a higher proportion of musicians and artists than any other town in Ireland. Paul had worked with Garry before and knew him to be an inspirational man, as well as a skilled recording engineer. His studio is a welcoming place too, with an excellent live acoustic and charming views out over a small turlough (a type of lake in limestone areas in the west of Ireland, with a very variable water level depending on the weather – in a wet winter, such as when we arrived, the level can be alarmingly high!). View from the top of the hill overlooking Garry’s studio, just to the right of the turlough (lake): 14 December 2015. We arrived in Kinvara on Sunday afternoon, 13 December 2015, and were delighted to chance upon some fine music being played for the Christmas craft market in the local hall, by musicians we knew – Dermot Byrne (accordion), Floriane Blancke (harp), Laura Ugur (fiddle) and Tony Trundle (fiddle and guitar). They even let us play a few tunes on the borrowed harp and guitar. Later we joined them for a session in Connolly’s bar with Mary Staunton and Mary Shannon, a great evening of music and sharing – the best possible warm-up for the first studio recording the following morning.

We spent three days in Garry’s studio in December, and another three and a half days at the end of March, and recorded the 13 tracks we’d planned. Our intention was to make a live recording, with no overdubs or special effects, partly because we wanted an accurate depiction of what we actually sound like, and partly because there is just something more inspiring and creative when playing live. Of course this can create problems with “spill” from one set of microphones to another, and there is the possibility of one person’s brilliant performance being unusable because of a mistake by the other. But Garry got over the first problem by careful mic placing and the use of a small sound-baffle partition, about a metre high, set between us, which allowed us to remain in visual as well as aural contact. As for mistakes – well, we’d done our preparation and just had to hope that we’d not make too many! And so it turned out – most tracks were done in two or three takes, some in just one. In Garry’s studio, looking out over the turlough. In the studio. We recorded live, with just a simple acoustic screen between us. Some people secretly do crosswords between takes. Paul and Garry concentrating on a playback. A month after we finished the recording stage, we returned to the studio for the mixing. This can be harder work than the actual recording. At the recording stage, you get the sound as you want it, and you make any little repairs that may be necessary. At the mixing stage you tweak it further, trying out tiny adjustments to bring out particular notes, to adjust the balance between the instruments, and so on. It’s surprisingly tiring. Fortunately we were working with one of the best in the business!

The mastering (preparing the final recording mix for manufacture) and manufacture of the actual CDs were done through Sun Street Studios, in Tuam. Veteran producer Kenny Ralph did the mastering, and his son Mícheál took care of the printing and CD pressing. We were very pleased with their work, and especially glad that they were able to deliver the finished product to us before the rather optimistic deadline we had set for ourselves, which was to launch the CD at Dungarvan Tradfest on 4 June 2016.

The CD sleeve is a collaborative work. We talked a lot about how we wanted it to look, and in September 2015 Reidun took lots of phone-camera photos in and around the old house near Tralee, County Kerry, where Paul and his wife Dee Sullivan live. The next day, using a better camera, Reidun and her partner Barry Lynch re-created selected shots (again, a *lot* of them!) from which we eventually chose the ones used on the CD. As the research nerd of the duo, Paul took on the job of sleeve notes. We put our ideas together on a fairly simple cardboard model of the actual sleeve, and took that to graphic designer (and piper) Eoin O Riabhaigh. Working with Eoin we were able to get our ideas in the right format for sending to the printers.

And that’s the story of how our CD was made!