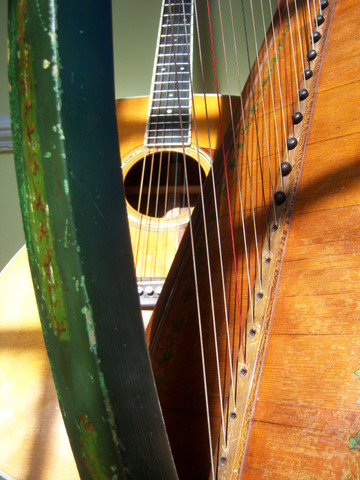 Our Belgian tour opened in Brussels on Wednesday, 14 June, with a lunchtime concert organised by the Irish Embassy as part of Tradfest Belgium 2017. It was held in the Aloft Schuman Hotel, close to the Embassy in the heart of the “EU quarter”. With some time to spare before the event, we had a stroll around the Parc du Cinquantenaire, or Jubelpark, or Jubilee Park (everything in Brussels has three names, in French, Flemish and English). It’s an impressive place, a little overbearing architecturally, but pleasant to wander around on a very hot sunny day. The concert was combined with the opening of an exhibition of paintings by Brussels-based Irish artist Helen O’Sullivan-Tyrrell. You can see some of her work here: https://www.helentyrrell.eu/ (in typical Irish small-world fashion, it turned out that she attended the same architecture school as Paul). The Irish Ambassador, Éamonn Mac Aodha, introduced both the exhibition and the concert, and stayed for the duration – whether that’s a compliment to the music, or just that it was nice to get a break from Brexit business in the embassy, we leave to the imagination… (in conversation afterwards, he was intrigued by the tribute to Belgian-Irish connections symbolised by the Irish national emblem, the harp, being played by a Belgian musician).

We played for about 40 minutes, trying out some of the new material we’ve been working on since recording our album. We were delighted with the enthusiastic response from the mixed audience – locals and Irish expatriates, Tradfest fans and art fans. It was great also to meet some old friends of Reidun’s afterwards, before heading back to Namur, the historic city which was our base for the duration of this tour.

The following evening, Thursday, we had a gig in Namur itself, in Le Merle, a fine music bar which we had visited last November. We opened our set with our kora-inspired arrangement of Eoin Duignan’s “Mimi and the New Generation Polkas”, taken from Eoin’s 1993 album “Coumineol”. This was in recollection of our previous visit to Le Merle, when (as described in an earlier blog) this album was on the stereo when we walked in, greatly surprising Paul, who had played on the album and wasn’t expecting to hear himself in Namur! And since “Le Merle” means “The Blackbird”, we also played our three-part set of that melody. It was a very enjoyable gig, a bit noisy at times down the bar, but a pleasant vibe. Afterwards we made room on the tiny stage and  had a few tunes with some local musicians on fiddles, cello, flute, plus our friend Patrick Van Uffelen on whistle & bodhrán (he also set up the sound gear for us, as well as papering the town with posters). Post-concert session in Le Merle (photo by the proprietor).

The next gig (Friday 16 June) was in Liège, where Reidun lived for several years. We were to play in L’Aquilone, a very interesting arts centre and café in an old building on Boulevard Saucy. The modest street entrance opens onto a short corridor leading to an unexpected open courtyard, nicely landscaped and laid out with tables and chairs, with the café on one side and the auditorium on another. Because of gridlocked traffic on the motorway coming into Liège, we arrived, hot and bothered, with just minutes to spare before the performance. No time for a soundcheck, just unload, set up, and play! Fortunately the sound man did an excellent job. It was a full house, a great response from the audience, and we really enjoyed playing for these people, as well as meeting some old friends. Since the dinner hour had been spent stuck in traffic, we were very happy to be treated to a late supper in the café. After that, it was time to hit the road for the long drive to friends near Aachen, across the border in Germany: a sociable overnight stop on our way to Lauterbach, in the state of Hesse, central Germany, where the annual Harfentreffen, or “harp gathering”, was being held that weekend (see http://harfentreffen.de/). This was not for a gig, but to collect a fine new harp (made by Pepe Weissgerber, Berlin) and to enjoy the company.

The following Monday brought the last gig of this short tour, in Den Hopsack, a charming arts centre, bar and restaurant in the cathedral quarter of Antwerpen. Again we were very pleased with the reception for our music, and were happy afterwards to continue the house tradition where performers are asked to choose a souvenir bottle from the extensive range of Belgian beers!