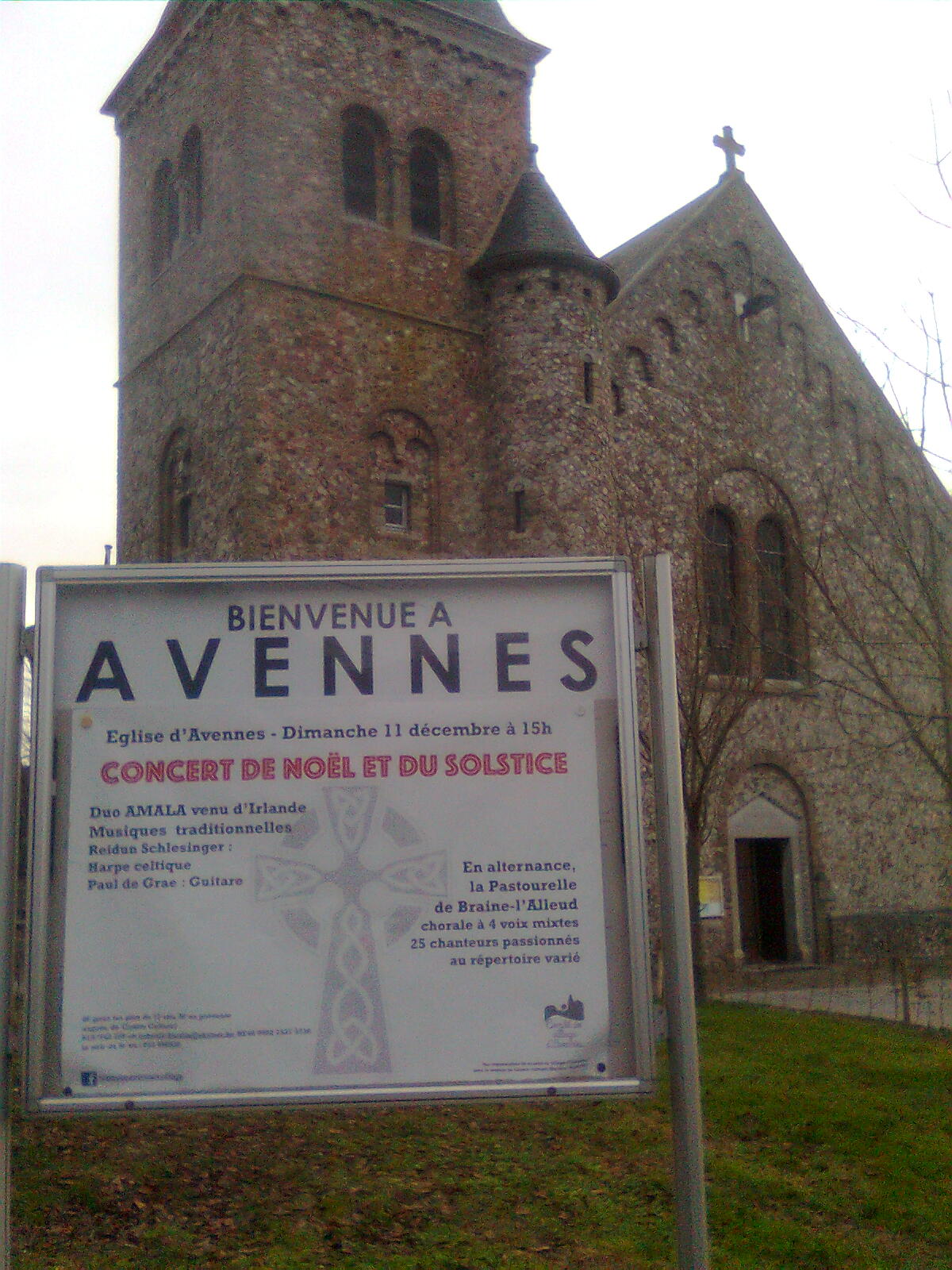 On Friday, 9 December, we were back in our friends’ house in Kornelimünster, near Aachen, Germany, where we had played a house concert a few weeks earlier. This time we were in the audience, for a concert by the Aachen-based jazz trio Crème Fraiche – piano, bass and drums, a common combination, but their music was really exceptional, very inventive and exciting. At one point the piano player was playing funky chords with his left hand while simultaneously playing a Miles Davis-style solo on the trumpet with his right! Not something you see every day…

The following morning, we drove back into Belgium and towards Avennes, a small village in a rural area about halfway between Liège and Namur, away from the highways, in gently rolling farmland under a huge sky. We were to perform in a Christmas concert there, arranged by an old acquaintance of Reidun, Gabriel Vastershaeghe, who has long experience of organising cultural events in that part of Belgium. He had kindly invited us to stay in his lovely old house, La Fontaine Gauloise.

In the afternoon we checked out the concert venue, which was the parish church, a modern building in Romanesque style. It has a wonderful warm acoustic, resonant but not too much.

The concert was to alternate between ourselves and

Checking out the sound in the church.

against the visual chaos of Paul’s shirt!

This is why Reidun uses a dark floor cloth, seen in next photo

(and why Paul wears plain clothing for performance…).

A fine receptive crowd turned up for the concert on the following afternoon (Sunday), practically filling the church. We were up first, and it was a real pleasure to play in such a venue for such a good audience. We played a combination of tunes from our CD and some new material that we’ve been working on since it was released. The choir were outstanding, and presented a nicely varied selection – concluding with a hearty rendering of “Jingle Bells”, and why not? Here’s the full programme:

Afterwards, as the programme shows, there was refreshment to be had in the form of mulled wine, beer, cakes and other snacks. For Paul, it was an enjoyable new experience to have a beer in a church (here with our friend Patrick van Uffelen).

A very enjoyable occasion. This was just a short visit, and there was only time for a little sightseeing in Bruges and Ghent before heading back to Ireland.

Spotted this little dudelsacker on the 14th-century Stadhuis in Bruges.