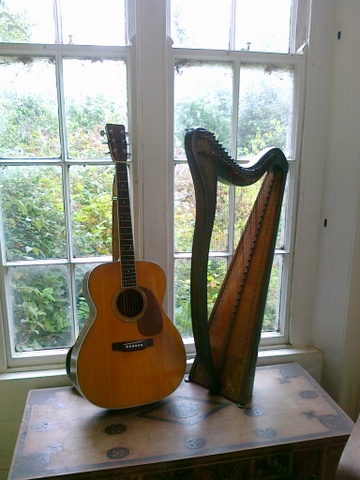 In our approach to all aspects of our music – selection, arrangement, composition and playing – we try to strike a balance between careful planning and spontaneity.  It might be interesting to illustrate this by examining the development of our composition, “Count Me Out” (the final track  on our CD “resonance”).

The germ of the tune was a little guitar riff that Paul came up with several years ago, under the influence of Malagasy guitar virtuoso D’Gary and various African soukous  guitarists. Have a look at these video links:

Thinking it might just be useful some day, Paul jotted it down in a notebook:

The reference to a polka is because he noticed afterwards a resemblance (in melody but not rhythm) in the second line to a well-known polka. Here’s that polka in a setting from Terry Moylan’s great book, “Johnny O’Leary of Sliabh Luachra”: Paul was idly playing this tune fragment during a break at rehearsal one day, and it caught Reidun’s ear. From workshops with inspirational harpist Uschi Laar and experience with bands such as Fasire (whose repertoire included Bulgarian music), Reidun had become adept at complex rhythms, and she was able accurately to analyse the rhythm pattern that Paul was playing intuitively (notice that the original fragment above doesn’t show a time signature!). Like the character in Molière who was surprised and delighted to discover that he’d been speaking prose all his life without knowing it, Paul was intrigued to learn that he had been effortlessly shifting between 7/8, 4/4 and 9/8 without knowing it… We improvised around this basic framework for a while, then Reidun came up with a second motif, a sort of power-chord sequence which after some tweaking came out like this:

Now we were getting somewhere, but we felt it still needed something more, maybe a contrasting mood. Trying out random guitar chords, Paul drifted into playing a sort of slow minor-key variant of the basic blues pattern which every guitarist knows, but instead of being based on E major or E7, it was based on Em9 and associated minor chords. This provided a suitable ground for Reidun’s jazzy harp improvisations, with some cool use of “blue notes” (done with the levers).

The last part of the tune to fall into place was the guitar intro, very loosely modelled on the invocation passage of an Indian raga piece, with a free-form variant on the first theme.

So the whole piece has hints of Africa, India, Sliabh Luachra, jazz, blues and even heavy metal. This is why we’re often stumped when people ask, “So what kind of music do you play in Amala?” Well, it’s complicated… !

If you don’t have the album (yet!), you can check out a sample of this tune on CD Baby:

This tune continues to evolve. In 2018 we revised and extended it, reworking the intro to make it more of a dialogue between harp and guitar, and giving the harp more prominence; we also added an entire new section at the end, a minor-key variant of the main theme: