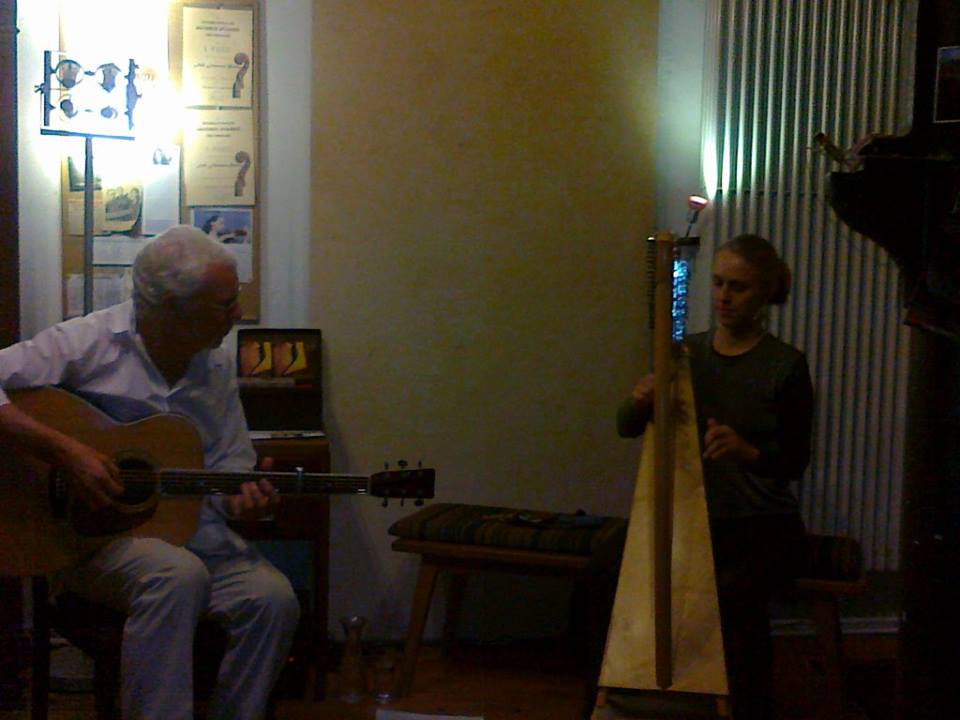 Trip 1 – from Munster to Kornelimünster

On 2 November, we loaded up the Amalamobile and headed off to Rosslare to catch the ferry to Cherbourg, followed by a long road trip across northern France and Belgium – with a brief detour through Eynatten, where Reidun grew up – finally crossing the German border and arriving in Kornelimünster, a small pretty town a little south of Aachen. This is the home of Falk Peters and Silvia Herl-Peters, old friends of Reidun, who were to present Amala in a house concert on the Saturday night, 5 November.

As well as being friends, Falk, Sylvia and Reidun formed the band Fasire – here’s a poster from 2003, with the famous green harp which Reidun also used extensively on the recording for our “resonance” CD. The “braccioline d’amore” is a 5-string violin with sympathetic strings, a fine instrument which Falk made himself; he is a professional maker of high-quality violins, violas and cellos (www.falk-peters.de).

Before the concert, we took a bus and went to have a look around Aachen (Aix-la-Chapelle in French), a fascinating historic city, Charlemagne’s capital in the days of the Holy Roman Empire over a thousand years ago. Not quite as long ago as that, Reidun used to busk there (here in 1994): One could easily spend days exploring Aachen, but we only had a short time. We saw the ancient cathedral, where Charlemagne is buried (https://en.wikipedia.org/wiki/Aachen_Cathedral), and other sights of the old town. Although it was only early November, Aachen was getting ready for the Christmas market, and there was a festive buzz about the place. Getting ready for the Christmas market.

Falk and Sylvia live in a converted 19th century brewery, which is now a residential artists’ workshop facility (Falk’s violin-making business is there). It’s a wonderful venue for a house concert, and we really enjoyed playing there. We did two sets of approximately 40 minutes each, with an interval, playing a mixture of tunes from the CD and some of the new material that we’ve been working on since making the album. Falk and Silvia joined us for two tunes and a song. It was a lovely social occasion, and many of the audience stayed for soup and conversation afterwards. The venue for our house concert in Kornelimünster. Waiting for the concert to begin. Falk joined us for a few tunes. Sylvia sang also, but there are no photos – she had the camera!

The day after the concert, we visited the picturesque village of Monschau; it was a surprise to Paul a few weeks later to see it featured in the BBC drama “The Missing”, supposedly as a Swiss village, in almost precisely the same view as this photo: After that, we had a very pleasant afternoon session back near Kornelimünster; to reach it, we crossed the German-Belgian border twice, imperceptibly. That’s how it is in that part of Europe now; whatever about the past (or indeed, the possible future) the borders are invisible except on main highways.

Our next destination was Leuven, or Louvain – most places in Belgium have both Walloon (French) and Flemish (more or less Dutch) names, not forgetting the German-speaking area in the south-east, where Reidun grew up. The traveller in search of Mons (“mountain” in French) can be confused by the fact that road signs in the vicinity refer only to Bergen (the Flemish equivalent).

With time to spare, we took a scenic route, first directing the Amalamobile to Spa, whose thermal springs – known since Roman times – were fashionable for European aristocracy from the 16th century onwards. Hence its name is applied to baths, thermal resorts and pampering salons everywhere. The Kerry village where Paul lives is called The Spa, because of the baths which existed there in the 18th and 19th centuries – though the Kerry Spa is not quite on the same scale of magnificence as the Belgian original… From Spa we headed to Liège, where Reidun lived for several years and (another coincidence) where Paul visited with two pals on their first continental European adventure many years ago. Paul’s only surviving photo from that visit is this, of the Fête de Wallonie parade: So there was plenty for both to see and remember on a nice walkabout through Liège, concluding with a beer in St Paul’s tavern on Rue St Paul. Then it was time to head off to Leuven, where Reidun was to give a lesson to harpist Christianne.

The following day, Christianne took us on a walking tour. Leuven is another very interesting historic city. Like others of its type, the old town is roughly oval, bounded by a ring road on the line of the former defensive walls. Outside the ring is the more modern city. Inside, many of the old buildings are preserved, and although it’s not actually pedestrianised, the use of motor transport is not encouraged. It’s very pleasant to stroll around. One very interesting place to visit is the Grand Béguinage. A béguine was a medieval community for unmarried women, not nuns but semi-religious. The Vatican was suspicious of these women, and most béguines were suppressed by papal order; but they survived longer in (what is now) Belgium than elsewhere. The one in Leuven is a UNESCO World Heritage Site: https://en.wikipedia.org/wiki/Grand_B%C3%A9guinage,_Leuven Our next destination was another historic city, Namur, where we were to meet our good friend Patrick van Uffelen, an enthusiast for Irish culture, great tin whistle player, bodhran player and piper (and frequent visitor to Ireland).

Situated at an important river crossing, Namur has a long and turbulent history – a very long history according to http://belgium.beertourism.com/cities/namur, which says that “… the inhabitants of the limestone caves, lying to the west of this city, were the first people known to have domesticated wolves. Canine remains found in these inhabited caves date back to over 31,000 years ago.”

The citadel, in a commanding position overlooking the junction of the Meuse and Sambre rivers, is an interesting place to explore. The path up from the Meuse side is steep and a little challenging, but gives great views (the path from the Sambre side, in the foreground in the photo below, is less steep but longer). View of the citadel, Namur.

Namur is also famous for its beer, and after dinner Patrick brought us to Le Merle (“the blackbird”), his favourite pub and music venue; check out https://lemerle.be. It’s a very welcoming, old-fashioned cosy bar, and the beer (over 60 varieties!) is indeed excellent. Patrick had told us that the barman is very fond of blues and Irish music, and sure enough there was some very nice Irish music playing over the speakers when we entered. It took Paul a moment to realise that he was actually listening to himself, accompanying Eoin Duignan on a recording from the early 90s! (If you’re curious, it was this track: https://www.youtube.com/watch?v=sWlitIYIkEY.)

The barman was suitably impressed, and it was with a comfortably “at home” feeling that we took our table and sampled the beer. Patrick van Uffelen and Paul in Le Merle, Namur. The bottles are small, but the beer is powerful – 10%! “Jerrycaster” guitar on the wall in Le Merle – made from a petrol can.

That was our last evening in Belgium, at least for this trip. Next morning the Amalamobile was on the road again, for Cherbourg and the ferry back to Ireland. We were already looking forward to the next trip, a few weeks later…